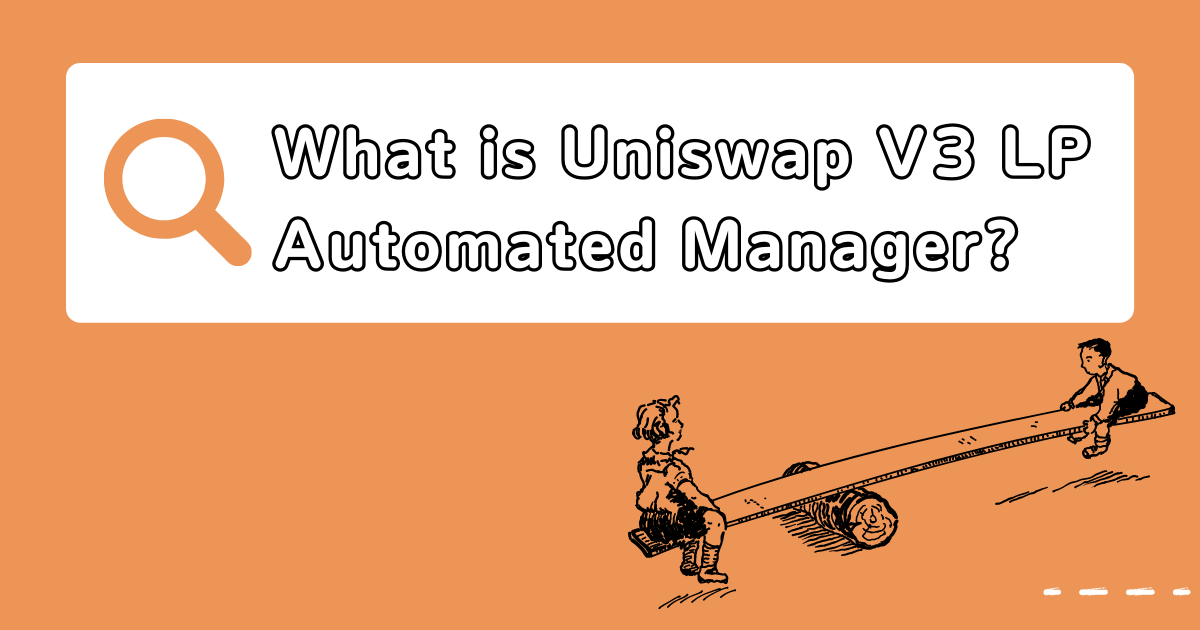 This post was originally in Japanese and has been translated into English. Unfortunately, I am still learning English, so I do not understand the nuances of English. Therefore, it may contain incorrect translations, so I cannot guarantee the content of this blog.

Before we get into the main text, I would like to clarify that I am a supporter of Automated Managers, and this article is not intended to discredit Managers intentionally.

I view Automated Manager as a Uniswap v3 only investment fund because of its performance, depending on its rebalancing strategy. Furthermore, I believe that investment funds need to be transparent, which is why I started writing this article.

I hope that automated managers will improve over time.

Why do we need managers?

Uniswap v3 allows you to earn more LP fees than v2 by providing liquidity in a narrower range.

On the other hand, if the price goes out of range, the liquidity provider will not earn LP fees. An out-of-range user must either wait for the price to come back into the range or remove liquidity once and provide liquidity again in another range.

The latter is called rebalancing, and the purpose of Automated Manager is to do that for automated manager user's LP. In addition, the manager will claim and reinvest the LP fees which are not automatically added to the pool in Uniswap v3.

One of the common advantages of Automated Manager is that the LP tokens issued can be made into ERC-20 tokens, which can be easily used for collateral and liquidity mining.

Before introducing Managers, I would like first to organize the rebalancing strategy since the performance depends on rebalancing.

"Active rebalancing" is a method of providing liquidity in a new range by swapping tokens to be managed during rebalancing. The downside is that there is a small swap fee for each rebalancing.

On the other hand, "Passive rebalancing" does not swap tokens at the time of rebalancing but provides as much liquidity as possible with the tokens in the vault and then provides the remaining tokens as single-sided liquidity. The term "single-sided liquidity” is not clear, but the point is that it is the same as a limit order, placed close to the current market price so that if the price moves in this direction, the second position also becomes active and collects LP fees.

It has the advantage of no fees when rebalance. However, LP fees you get will decrease compared to active rebalancing if the market continues to fluctuate to either bull/bear for a long time (because the single-sided liquidity won't work & the liquidity of the two-sided portion will also decrease).

How to choose the range

How to choose the range in rebalancing is even more important than the method of rebalancing.

When considering LP income, the best range is as tight as possible to the future range of prices. (Which is unknown)

When only considering decrease IL, it is optimal to make the range as wide as possible as v2 LP.

Therefore, each manager team uses various approaches to choose the range. However, we won't know which approach will perform better until we open the lid.

Performance fees are the mainstream and are collected from Uniswap v3's LP Fee.
The fees are used to pay for gas to rebalance, buy back of governance tokens, etc. It is important to note that fees need to consider the strategy.

For example, let's say that Manager1 uses a strategy with wide ranges (low LP fee, small IL), and Manager2 uses narrow ranges (high LP fee, large IL). In this case, if Manager1 and Manager2 performance fees are the same (10%) and performance (LP Fee - IL) is also the same, Manager2 will pay more rebalance fees, which is not desirable for the user.

When competitors increase, rebalancing timing may become more critical because rebalancing is the timing of compounding LP fees and realizing IL.

In addition, the single-sided liquidity of passive rebalancing becomes completely useless when the market moves in one direction. Therefore, in a trending market, passive rebalancing will need to do some active trades to re-centre the liquidity at the market price to improve fee income. However, if it is done too much, there will be a disadvantage as well, since something like "sell low and buy high" will happen on one side.

Alpha vault is the first automated manager that launched v0 on May 7, two days after the launch of Uniswap v3.

What can be read from this is that the Manager is trying to make steady money by using a wide range to reduce IL. If the market fluctuates rapidly, there will be little damage.

Incidentally, the range width is determined by backtesting.

However, the author created the following chart by taking the same USDT-ETH from the on-chain data. Thus, dark green is the base liquidity, and light green is the single-sided liquidity.

Even when considering the different time periods, the two charts look different. The Visor chart implies much more frequent changes to the liquidity ranges than the on-chain data indicates.

The strategy I can see from the on-chain is to specify a narrow range and earn high LP fees while accepting IL.
In addition, once the range is set, the strategy postpones realizing IL by not rebalancing until it is out of the range, making it a strong strategy for range markets.

The following chart shows the evolution of the range of USDT-ETH. Sorbetto Fragola is active rebalancing, so the liquidity is always only single position will be placed at each rebalance.

I don't know how they determine the range, but it is somewhere between Charm and Visor regarding width. They have just launched and may not have finalized their strategy yet, but it seems that they are trying to reduce the number of rebalancing because of the swap fee for each rebalancing.

Harvest Finance, which many of you may have heard of, actually offers a Uniswap v3 vault. On the other hand, this vault does not rebalance and only collects and compounds fees, so it is a little different from the managers we will be dealing with in this article.

If the range moves significantly, the developer will deploy a vault with a different range, and users who are satisfied with the vault will add liquidity.

The following sections will introduce products that are not yet available to users in the major pool or have not been launched yet.

Other pairs will be available in the future through Sorbet Finance provided by Gelato as well.

As I wrote about Gelato Network before, it aims to be a network of bots that execute smart contracts, and this time those bots are executing the rebalancing. vividot-de.fi

By the way, I asked the team about the range of rebalancing, but there is no detailed documentation yet, and they will announce it soon.
I think it's possible to guess by following the rebalancing tx and contract, but I won't do it.

Aloe Capital claims to be a "crowdsourced liquidity allocation protocol."

What a "staker" does, then, is to stake Aloe Capital's governance token Aloe to predict the price of the target asset. The rebalancing range is then determined by aggregating the stakers' forecasts. Stakers are rewarded with an increase in the amount of Aloe they stake if their predictions are correct and a decrease in Aloe if they are wrong.

Interestingly, traditional price forecasting is a zero-sum game (minus-sum when considering protocol fees). In contrast, with Aloe Capital, it becomes a plus-sum game by receiving a portion of the LP fees.

"Dutch auctions" and "Liquidity Sniping" are also considered to promote the rebalancing of single-sided liquidity.

This is probably the earliest submission of a concept to Medium, but it has not been launched yet.
The contract has already been implemented and audited, so I expect it to be launched soon.

A quick look around the rebalancing of the source code, the strategy seems to be as follows.

Twitter is frozen, and Telegram is banned from writing, so the only information we have is from the official website: "Mellow protocol is UNI V3 liquidity providing optimization solution. 🧑 🌾 Provide your liquidity and earn high returns.

The whitepaper says they aim to "derivatives realized on Uniswap v3", and the first step is to implement leveraged liquidity provisioning (LP-ing).
Leveraging LP-ing and liquidity-providing optimization at the beginning of the paper have slightly different meanings, so that they may have changed their policy.

I have not followed the formulas in the white paper, so if you are interested, please take a look at it.
HP: https://mellow.finance/vault

Sommelier Finance provides an interface that makes it easier for users to add liquidity to v3 (e.g., swapping to match the range when supplying liquidity).

Since it is only an interface, for now, users need to rebalance themselves when they are out of range, but they plan to automate rebalancing using Sommelier in the future.

For more information about Sommelier, please refer to the website.

Although there is no documentation or white paper, Steer Protocol is a product that was recently selected as Sushi Incubator by Sushiswap.

The product can be roughly described as a way for users to create, participate in, and execute strategies for using any DeFi.
One of the strategies introduced is Uniswap v3's Automated Liquidity Management.

To be honest, I feel that the product is too ambitious to be successful, but I have high expectations for the future since it was selected as Sushi Incubator.

Currently, the LPs that are performing well are the ones that are not out-of-range, setting a wide range as shown in the following tweet. However, for example, if the price of ETH drops or up significantly and goes out of range, the performance could be terrible.

Also, it's only been in the last month that money has started to flow into managers. As managers start to manage large amounts of liquidity, the fees of other LPs who have a wide range will decrease relative to them because the center of the liquidity will follow the current price.

On the other hand, the reality is that the Managers' performance introduced in this article is not as high as one would like, and it does not mean that you will make lots of money if you put it in. In fact, I calculate the performance using DuneAnalytics. You will see that all managers are struggling with IL, despite the differences in strategies. And depending on the period, v2 LP (without fees, only IL, i.e., worse case) may perform better.

Finally, "So if I'm going to use a vault, where should I use one?" If I compare performance over a short period, it looks like Charm>Fragora>Visor. Of course, I can't say for sure, but if I also consider manager fees, which are not factored into performance, I think the order will be generally the same.

Also, Some managers are not sincere and hard to recommend because they show a high Fee-Based APR on their website that completely ignores the existence of IL.

I will keep a close eye on performance as it needs to be looked at over a longer period, but it is interesting the results show that the wider range as Charm(Alpha Vault), the better the performance.

I'm most interested in Aloe Capital. Still, I know from the results of Charm, Visor, and Sorbetto Fragora that it's not enough to predict the range exactly. So I'm wondering how to reward Staker or how to aggregate staker's prediction.

I think my performance calculations include LP fees and IL. But, I have just started studying SQL and DuneAnalytics for a week, so there may be some mistakes. It's dirty code, but I would appreciate it if some knowledgeable person could check the SQL.

I would like to thank overanlyser.eth for English language editing. But as I said at the beginning, I'm not sure I'm translating exactly what I want to say.